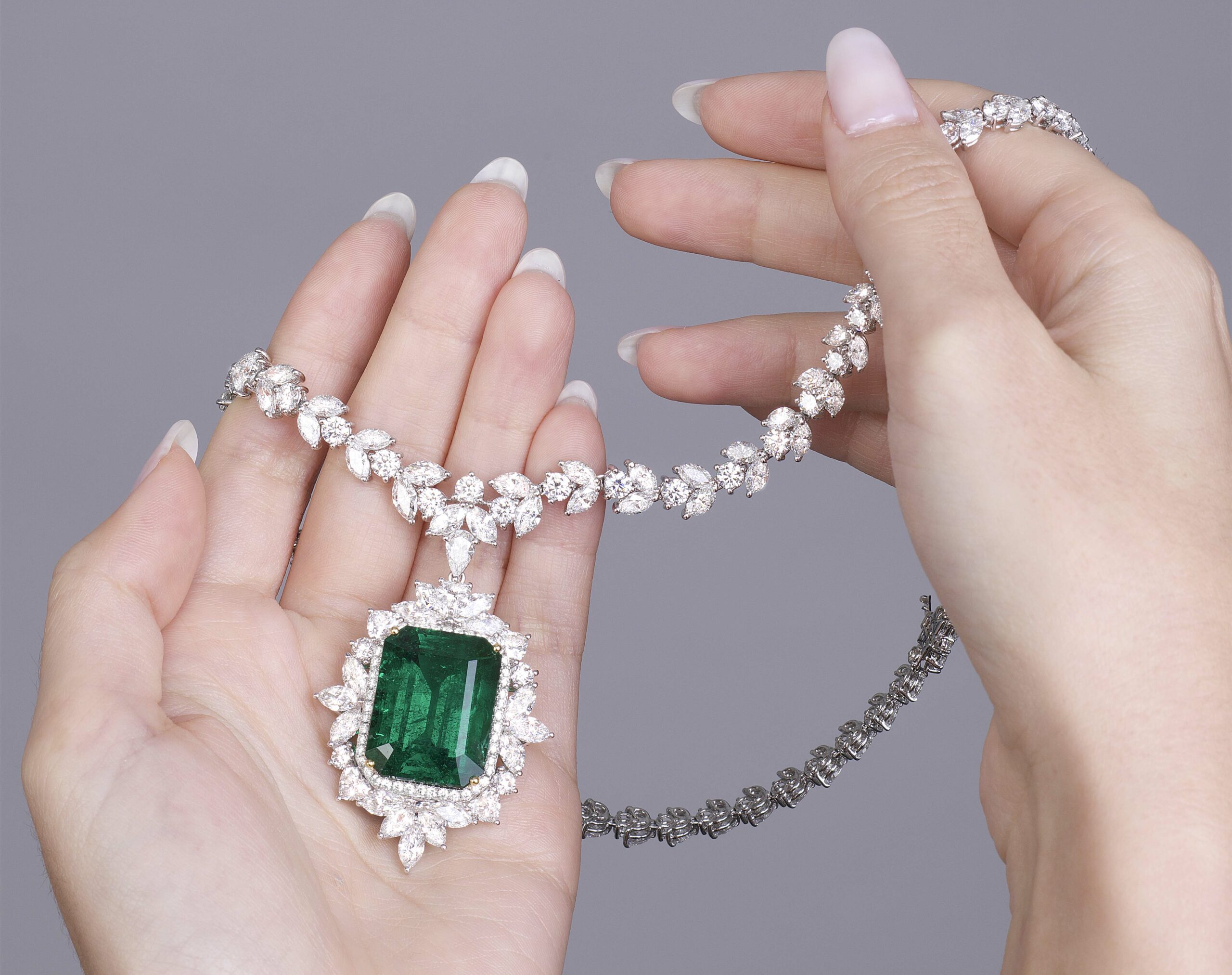 Gemfields promotes Phillips’ Treasures from Zambia: Behind the scenes of An Exceptional Emerald Collection

The collector of the largest collection of Zambian emeralds ever to be offered at auction offers glimpses into how he selected such fine gemstones, explains what attracted him to Zambian emeralds and imparts advice to those looking to buy an emerald of their own.

Gemfields is delighted to promote Phillips’ Treasures from Zambia: An Exceptional Emerald Collection, which is the largest collection of Zambian emeralds ever to be offered at auction. Comprising over 45 lots, the collection includes 993 carats of breathtaking fine Zambian emerald gemstones. Bidding is open from 23 November until 2 December 2021, and part of the proceeds are set to benefit the Gemfields Foundation.

Zambian emeralds make rare appearances at auction. Discovered more recently than their Colombian counterparts, but far older in formation, Zambian emeralds were seldom seen on royalty or stars of the silver-screen prior to the 1970s, as the majority of the fine gemstones we see today remained unearthed until that time, sleeping deep under the Zambian soil. It is perhaps for this reason that Colombian emeralds have commanded a premium, for it certainly can not be said that Zambian emeralds are inferior in quality. On the contrary, their composition lends itself to superior levels of clarity and size and a distinctive vivid bluish green colour, which adds to the overall depth of the gem. Examples originating from Gemfields’ Kagem mine in Zambia have been seen to demonstrate the very best that nature can offer.

Here, the collector of the Zambian emeralds offered to auction by Phillips shares his perspective: “A close friend from Europe, a collector himself, once asked me how I ended up with such a large collection of Zambian emeralds, when most collectors would seek to buy Colombian emeralds? My response was that it was only a matter of time before the value of top-quality Zambian emeralds would come to be appreciated, and indeed we have seen that happening and accelerating in the recent years. To certain collectors and gem connoisseurs, top quality Zambian emeralds are now considered to be held in equal esteem to those of Colombian origin. History has also shown and taught us that evolution is a natural and progressive process. For instance, the most historical and invariably the most sought-after sapphires were from Kashmir. However, that changed over the years and collecting broadened to Burma (now Myanmar) and Ceylon (now Sri Lanka). The same can be said for natural Burmese rubies, which are rare to find these days, but over the last several years, the focus has turned to fine gem-quality sources from Madagascar, Mozambique and Thailand.

On a personal level, I draw my collecting to my penchant for cigars and fine wines. I have been passionate about cigars for most of my adult life. To me, nothing less than a matured Cuban Robusto would be acceptable. But over time, my preference expanded as other diverse choices emerged and evolved, and I found I could equally enjoy a Nicaraguan, Dominican, Honduran or Ecuadorian Robusto. The same can be said of wine. Traditionally, French wine would be the choice of many. However, in recent years that has changed to include a much wider variety. These days, wine connoisseurs equally appreciate Italian, Spanish, Argentinian, South African, Chilean, Australian and Californian vintages. In the same vein, this is how I see the curation of my collecting life.”

The collector refers to the process of amassing this exceptional collection as “an unforgettable part” of his life, and these Zambian treasures will leave behind a legacy, as the collector has pledged that part of the proceeds from the sale of the collection will benefit the Gemfields Foundation. Phillips has generously pledged to match this sum, enabling an even greater positive impact.

Launched in January 2021, the Gemfields Foundation is a UK-registered charity that funnels 100% of donor funds directly towards projects. Administrative overheads are absorbed by Gemfields Limited and enablers on the ground are provided by Gemfields’ mining operations, meaning donations are able to go a long way, and quickly.

Formation of the Foundation comes after a decade of carrying out projects in the vicinity of Gemfields’ mining operations in Africa, including several that have been privately funded by guests to these sites. A key Gemfields tenet is that Africa’s gemstone wealth must contribute meaningfully not only to host-country economies, but also to host communities and their next generations by way of education, healthcare and livelihoods projects. By inviting external donors to contribute, the Foundation is able to scale up efforts and benefit a far greater number of communities and conservation projects. To date, the charity has provided solar lamps to families displaced in the Cabo Delgado province in Mozambique and is close to completing a primary school in rural Madagascar. The collector and Phillips have selected for Zambian projects to benefit from the sale of these Zambian treasures.

Zambian emeralds first appeared on the collector’s radar when discussing emeralds with a friend and expert in London. “We talked about the characteristics, comparison, value and comparable to more historic sources. I was convinced that Zambia would emerge as the next best source for emeralds just as Burma emerged as the next best source for sapphires after Kashmir. Shortly afterwards, a friend from New York met me at a hotel lobby in Geneva, and through him I bought my first Zambian emerald. After the purchase, I looked at it every day for the next few days as we would do after buying a new car. That was the beginning, and it was not long afterwards that I actively started searching for the best of the best in Zambian emeralds.”

One such treasure that captured the collector’s attention instantly is the 56.87 carat Zambian emerald necklace. It carries Gubelin certification, including a citation for being the largest non-oiled Zambian emerald certified by the laboratory to that date. The collector didn’t leave its side until the deal was closed and the “simply mesmerising” gemstone was his – “I haven’t seen such a piece of gem before or after. To me, it was a must.”

A pair of 8.13 carat and 8.27 carat emerald and diamond earrings, and an emerald and diamond bangle totalling 60.94 carats stand out in the collection, in addition to a suite comprising earrings, bracelet, ring and necklace that totals 117.82 carats, 11.94 of which belong to the ring, which is certified as having received no clarity enhancement.

Selection of gemstones for the collection came with personal knowledge and judgement, with each gemstone viewed under assorted light sources and a visualisation of how the gem would appear mounted within a piece of jewellery. The collector visited museums and auction previews and attended live auctions by global houses, as well as international exhibitions and shows in Basel, London, Hong Kong, New York and Las Vegas. He would regularly “browse through catalogues, inspecting the finest and rarest objects”. He says: “participating in bidding became an intrinsic part of my life.” Expert advice guided the way, but this growing knowledge base, imagination and passion played an essential role in amassing the treasure trove Phillips brings to auction today.

When asked what advice he would give to someone who is considering buying a Zambian emerald for the first time, the collector of these exceptional emeralds responded: “Don’t wait until it becomes rare and prohibitively expensive. It’s already on the trajectory. History repeats and this is what we saw with both Burmese sapphires and Mozambican rubies.”

Treasures from Zambia: An Exceptional Emerald Collection is open for bidding via Phillips from 23 November – 2 December 2021.